Re-Evaluating Our Current Understanding Of Knife Attacks And Injuries

My following article has also been published in the 'Counter Terror Business' publication (Issue 41 - published 07 February 2020).  It is my attempt to highlight the clear misconception that 'KNIFE injuries' automatically means 'STAB injuries'... where in most cases the majority of knife attacks in fact resulted in 'SLASH injuries'. This is of great significance, especially to those fighting knife crime and engaging with the threats we have recently seen in London and other European cities. But let me start with one question:

Why are so many terrorists and criminals turning to edged weapon?

The U.S. publication ‘Law Enforcement Today’ published an article on 02 October 2019, titled: ‘FBI: More people killed with knives, hammers, clubs and even feet than rifles in 2018’. The FBI is making very clear that edged weapon represent a greater danger in today’s society than firearms. A statement reads: “Nearly four times as many people were stabbed to death as killed with rifles in 2017.”

Over recent years we can clearly see a massive rise in the most violent type of knife attacks in countries around the world.

And we all will remember the 29 November 2019, when five people were stabbed (two fatally) by Usman Kan in Central London. This was an attack with the most basic plan, which could easily be replicated by literally anyone whose intentions it is to inflict death and injury. Khan’s weapons of choice were two knives. He targeted a well-attended conference, which was held in the Fishmongers Hall to maximise the damage he could cause to the multiple victims in an enclosed space, with the intention to continue to so in the packed area of London Bridge.

I believe we all can recall several other well documented knife attacks in London in recent years.

But back to the question of why those vicious and merciless individuals turn more and more to edged weapon.

Well, obtaining, selling or buying firearms, exporting or importing firearms, and carrying or transporting them comes with a real risk these days. Due to the threat of global terrorism, Intelligence Services and Law Enforcement Agencies around the world are keeping a very close eye on everything that is capable of firing rounds aiming to kill people. The risk of being arrested during the planning stages of an attack is just too high for most terrorists or criminals.  Due to these factor and the UK’s CONTEST strategy of the ‘four P’s’ Prevent, Pursue, Protect and Prepare countering the causes and effects of terrorism, it has become extremely difficult for terrorists to plan and execute a large-scale attack here in the UK.

However, London is an extremely busy Capital City and determined terrorists have learned to understand that keeping a low profile, working alone, staying under the intelligence radar during the planning stage, choosing a weapon which will go unnoticed and picking a busy location will ultimately increase their chances of ‘success’.  They no longer require bombs or full-automatic weapons.  Edged weapons, knives and machetes have become the weapon of choice for many so called “lone-wolf” attackers, partly due the low planning required (whether against an individual or mass group).

We also need to accept that knives are commonly available, and this is not going to change, no matter what the law says or will say in the future. We cannot stop people from walking into the kitchen or the local hardware store, grabbing a knife and randomly stabbing other human beings. If one has the intentions to cause harm to others using an edged weapon, then Intelligence Services and Law Enforcement Agencies will always struggle to prevent such atrocity.

Knives are also much more concealable which reduces the risk of detection prior to any planned attack, and no real training is required if one’s intention is to randomly attack, harm and kill innocent people.  Firing a gun and hitting moving targets from a reasonable distance is not as easy as many might believe.  Grabbing a well concealed knife and randomly stabbing people in a confined space is unfortunately ‘simple’.

It is an unquestionable fact that operational risks and threats have partly been established based on an incorrect understanding of knife attacks, the incorrect reporting of it, as well as incorrect conclusion or interpretation of medical statements. Historically ‘knife injuries’ have been reported as ‘stab injuries’, hence we have been made to misbelieve that both mean the very same.  This means one could argue the result of some risk assessments can be deemed as ‘questionable’, which subsequently at that time would have highlighted a need for stab resistant body armour in order to mitigate that precise risk.  But is that really all that clear and simple?

Ian Horsfall and Mathew Arnold, of the Impact and Armour Group within the Department of Engineering and Applied Science at Cranfield University (Defence Academy of the United Kingdom) wrote a comprehensive piece on ‘Protecting From Slash Knife Attacks’. A statement within this article reads:

“A retrospective survey of hospital admissions data that contributed to the development of the standard suggested that 63 % of wounds attributable to sharp edged weapons were SLASH events.”

The intention of an attacker was most likely and will most likely always be to stab a victim, however, due to the motion and movement of both the attacker and the defending person that attack is most likely to result in a slash injury!

The ‘Journal of Clinical Forensic Medicine’ featured an exceptionally interesting article by A. Bleetman, C. H. Watson, I. Horsfall and S. M. Champion in 2003, titled: ‘Wounding patterns and human performance in knife attacks: optimising the protection provided by knife-resistant body armour’. The following is an extract form this article:

“Knife wounds to the chest comprised less than a quarter of knife wounds in the victims of edged weapon assault described in this study. Therefore, most stab wounds will not be prevented by current armour systems”

“The high incidence of serious injury to the left loin is perhaps influenced by the defensive stance of the victim, who has presented the non-dominant side of the body towards the assailant… it is clear from the distribution of wounds in real-life knife attacks that anti-slash protection is required for the arms, neck, shoulders, and thighs. It will clearly not be possible to provide armour of any standard to protect the face and head for routine wear.”

Of course, homeland security as well as private security professionals in London should be issued with conventional body armour or stab resistant vests. However, these statements and findings clearly highlight an additional operational need for slash resistant clothing, effectively protecting key arteries, muscle and tendons from laceration.

The cutting of a key artery can, in fact will most likely lead to rapid blood loss, subsequent shock and ultimate death. The cutting of a specific muscle or tendon can lead to immediate immobility and leave the officer in a totally defenceless position. 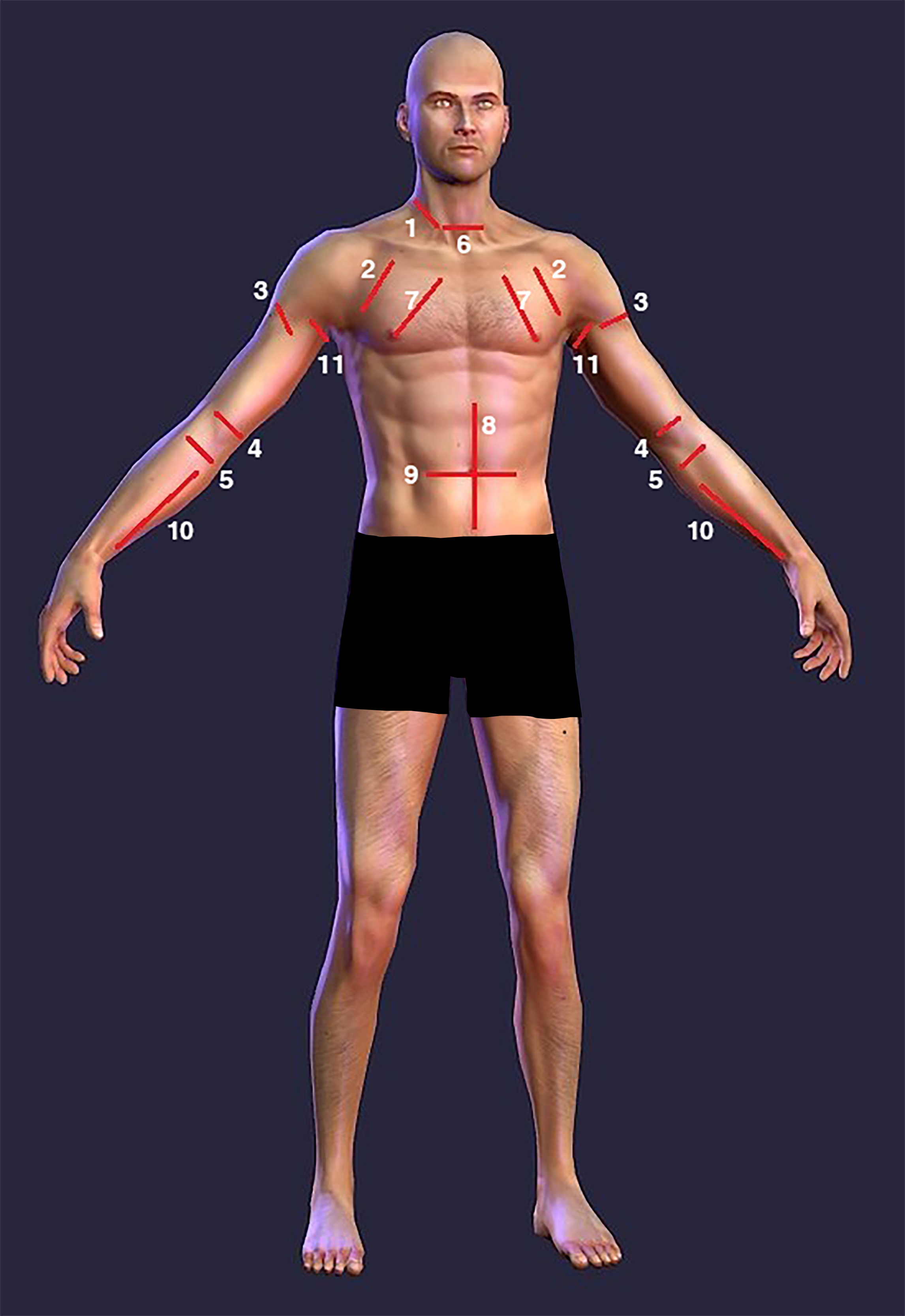 All of the potential injuries following any of the above highlighted cuts could be prevented.

SlashPRO® Slash Resistant Clothing can make a real difference. Offering tested, thoroughly field tested and dependable cut protection they significantly improve the personal safety of those who protect us, our infrastructure and events.

From the point of the employer, cut injuries can lead to severe legal and financial repercussions. From the point of the injured professional, and depending on the level of cut injury, it can also lead to long-lasting emotional scars, ongoing distress, physical pain, and in the very worst-case scenario, death.

Unless they have undergone extensive edged weapon training, most frontline professionals will, by instinct, lift their arms and hands during a potential hostile situation, in order to protect the face and head. This is nothing to be ashamed of, it is normal, and only highly trained operators would respond differently and more effectively. However, we must understand that this very natural reaction alone will expose extremely vulnerable areas, and this is precisely where slash resistant clothing can make a potentially lifesaving difference to the wearer. 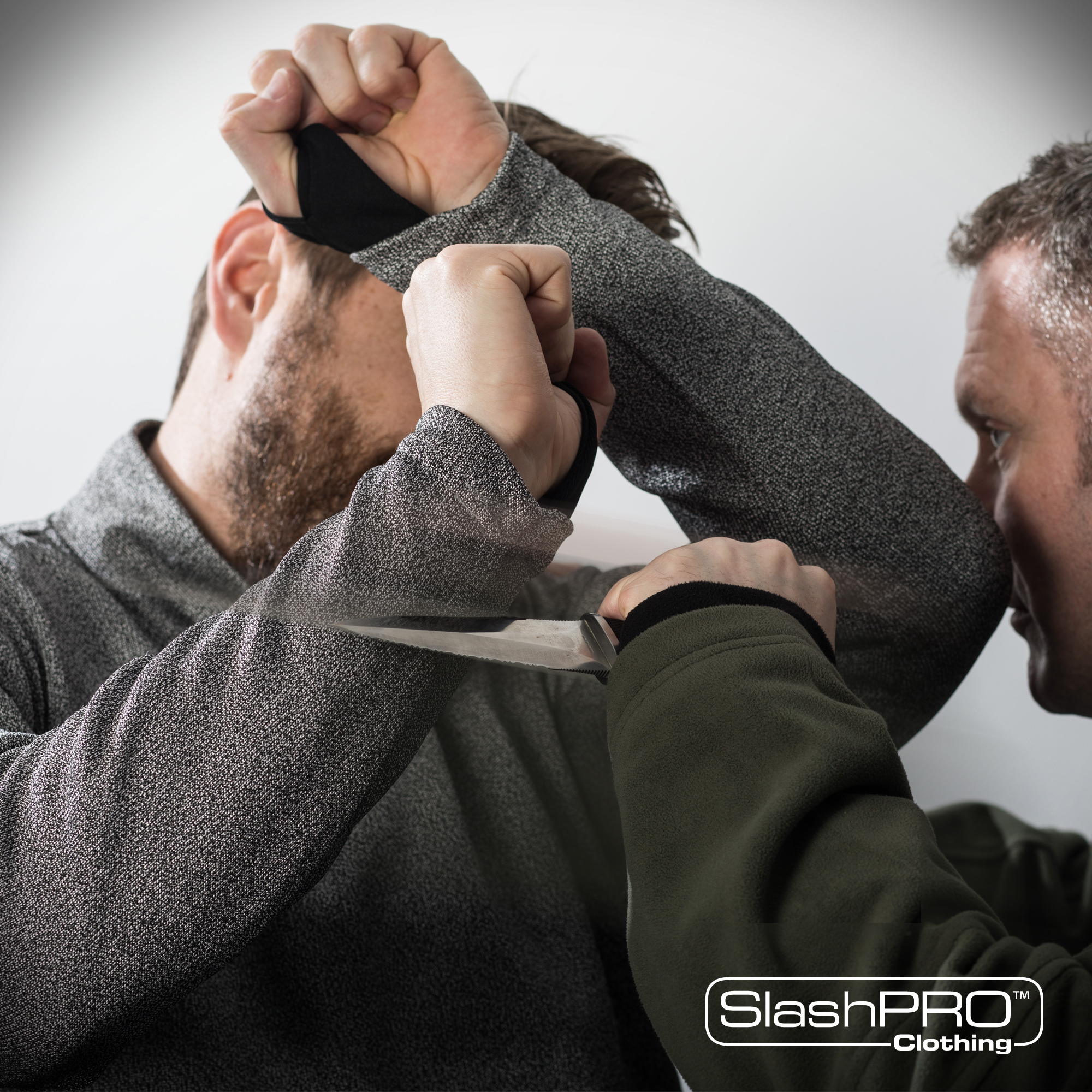 Understanding the fact that being ‘slashed’ is a real operational risk and the fact that slash resistant clothing (which does not look confrontational, offensive or authoritative) is mitigating this specific risk, should most certainly be considered when conducting any future risk assessments.

Each policing unit in the UK has a unique job to do and as a result there are numerous uniform entitlements for specialist roles. Requests for other items of clothing might however require the completion of another risk assessment for the activity carried out by the specialist unit, which should be endorsed by the appropriate Commander and forwarded to ‘Clothing and Equipment Group’ for consideration.

Frontline professionals must of course dress appropriately for their specific job role, especially individuals engaged in covert operations where their identity must be concealed may dress to suit the circumstances. Wearing slash resistant clothing is precisely that, ‘dressing appropriately’.